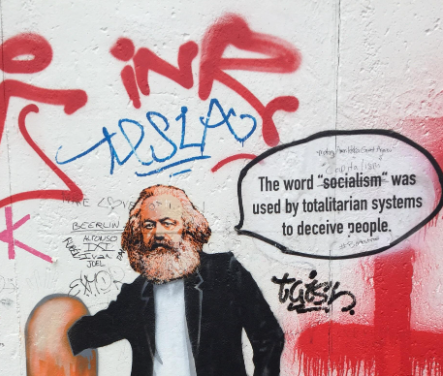 There are many critiques of this seemingly idealistic, utopian society. However, to German Philosopher Karl Marx, this world wasn't only possible, but it was inevitable. Marx argued that it was conflict of our relation to material goods that guided history, and that this would ultimately lead to a worldwide, classless communist society in time. The term he coined in this was, "The March of History".

Capital from the beginning was not owned by collectives generally, and its ownership was also not uniformly distributed among individuals. Rather, capital was (and still is) typically owned by a very small handful of individuals in society. Marx referenced these individuals collectively as the "Bourgeoisie". The price of capital makes it prohibitively expensive to begin new ventures and compete with others from this higher class of society. So prohibitively expensive, in fact, that only the members of the Bourgeoisie can afford the construction of new capital. This directly refutes rugged individualist assertions from Capitalists, as they often tend to rely on an argument that the Bourgeoisie are deserving of the income related to their capital, since they took on the risk of the investment. However, can you really call it a risk when capital ownership is usually systematically denied from the lower class? If it were such a risk, why has ownership of capital been systematically denied to the lower class? I'll write more about this in an upcoming article, and link it here.

Anyways, back on track. Ultimately, this leads to a system in which, for a member of the working class, termed the "Proletariat", there is no getting ahead. Rather than fairly being compensated for their work, the Bourgeoisie owns the mechanism by which the economy operates--and is put in power over the Proletariat through wage compulsion. Since in a Capitalist society, greed is the main motivator for progress, the Bourgeoisie is incentivized to pay the Proletariat little more than what is required to survive and continue to purchase their products. To Marx, and Leftists, the capitalist economic system therefore thrives solely on the exploitation of the working class. It bastardizes the goal of an economy--to increase human development for all members of a society. This pure goal is cast aside, in favor of exploiting workers for the personal gain of the Bourgeoisie.

The exploitative nature of the capitalist economic system, Marx argues, will cause widespread discontentment among the working class, through a process termed "Alienation", where workers are alienated from the fruits of their labor, each other, and the human nature of their work. Alienation is a complex topic highly debated by Leftists as to whether or not it's still relevant, but since Alienation Theory is key to Marxism, I will include it here.


Another form of alienation I want to set aside due to it's relevance today: capitalism also alienates workers from each other. In order to stay in power, and maximize profits, the Bourgeoisie sends messages that tell the Proletariat that they are in constant competition between each other for their job. However, this is not the only form of mutual worker alienation today. The same divide is present in the political landscape of America, turning the attention of the Proletariat onto themselves rather than the elite upper class, who is the primary cause of their poor living conditions. For if the Bourgeoisie were to pay the Proletariat an amount that is closer to the value of their labor and turn a small profit, they would no longer be in power.

Marx theorized that as time goes on, the ownership of capital will continue to become more concentrated among a select elite. Therefore, the gap between the Proletariat and the Bourgeoisie only becomes larger (See: Wealth Inequality in the US). This discontentment among the working class at their living conditions, Marx stipulated, will eventually lead them to rise up against the tyranny of the few, at which point they will instate a new society--one without class or any other systems of oppression, such that every person is held in equal regard and is fairly compensated for their contribution to society relative to their ability.

If you'd like, feel free to add me on Discord and suggest edits! I have it listed at the home page. Other than that, just try to stay conscious of your situation and have a great day! Thanks for stopping by!


Here, I will continually add information to clear up misconceptions associated with Communism as it was described by Marx:

Democracy: The idea that Communism is inherently undemocratic is a complete lie. Communism and democracy are not mutually exclusive. In fact, Marx even conceded that in countries with very strong underlying democratic structures, the transition to Communism could be attainable by peaceful means. Marx's call for revolution and a temporary dictatorship of the Proletariat is therefore only relevant in capitalist countries where there is little democratic institutions to allow a peaceful transition of power. In the Communist Manifesto, Marx even described implementing strong underlying democratic structures and universal suffrage as being "one of the first and most important tasks of the militant proletariat", in reference to the transitional state that would need to be set up after a revolution. The USSR's purges at the hands of elected leader Joseph Stalin was a clear failure of this task, and almost no leftists will claim that Joseph Stalin's actions were justified--in fact, Joseph Stalin's reign cemented the USSR's inability to transition out of the dictatorship of the proletariat, and all Communist governments set up by the USSR from that point on were built on dictatorships to answer to this undemocratic system. Instances of totalitarian leadership in Communist countries with support from the USSR are almost all a direct result of this, so the argument that "Communism has been tried everywhere, and always resulted in dictatorships" is therefore refutable by these means, and is an argument caused by a lack of understanding of the initial conditions of the revolution in Russia.